Cory Booker goes to Philadelphia to get the black vote out 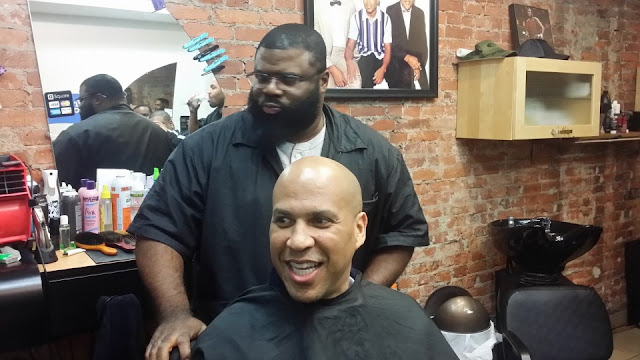 Seeking to close off any route for Donald Trump to get the 270 electoral votes he needs to be elected president, U.S. Sen. Cory Booker visited the city of Brotherly Love Saturday to ensure African-Americans went to the polls on Tuesday.

"This state is going to determine which way our country goes," Booker said.

Booker (D-N.J.) was one of several surrogates of both parties who, like the candidates themselves, are fanning out to battleground states this weekend in advance of Election Day. Gov. Chris Christie originally was scheduled to visit Pennsylvania as well on Saturday, though his appearance was cancelled after two former aides were convicted in the Bridgegate trial.

He visited a black-owned barbershop, where pro-Clinton campaign signs such as "Love trumps hate" and "Stronger together" shared space with posters of the Negro League, Muhammad Ali standing over a fallen Sonny Liston, and Obama. He spoke before a group of blacks who were organizing get-out-the-vote efforts. And he addressed dozens of Clinton supporters at a storefront headquarters.

Booker delivered pep talks, posed for selfies, posted videos on Instagram, and asked those in attendance to give one hour, 48 minutes or even 32 minutes to make calls on Tuesday to ensure that Clinton backers go to the polls.

"This is one of those elections where it's forward or backward," he said at the barbershop. "We need to get our friends and our families out to vote."

Read more: Booker goes to Philadelphia to get the black vote out