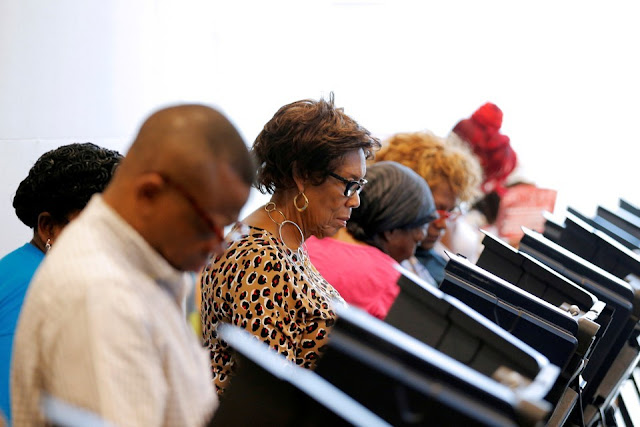 Democratic strategist, talking heads, and many Hillary Clinton supporters are in a slight panic over the lower early voting totals for African Americans. Calm down people; there is no reason to start popping Valiums or downing bottles of whiskey here. There are two factors that when taken into account give a better picture of the cause of the lower totals and should give all Hillary Clinton supporters a rosier outlook.

Factor #1: Hillary was never going to get the same early voting totals as Barack Obama among African-American voters, but then again she doesn't have to. All she has to do is get the 88-90% of the total black vote that Michael Dukakis (89%), Al Gore (90%), and John Kerry (88%)Kerry got. If she does that and continues to expand her base among Hispanic voters, Asian voters, and college educated women, she will be okay. *Sidebar: Yes, smart asses I know that Dukakis, Gore, and Kerry all lost but 88-90% of the black vote back then does not equate to what 80-90% would be now as many more African Americans are voting.

Factor #2: Many of those panicking are ignoring or minimizing the effect of Republican voter suppression tactics. In many states like North Carolina and Alabama, the number of early polling sites was reduced, and those that did open up had their hours cut. Many black voters preferred to use the early voting option so of course, their turnout numbers would be lower if those options are taken away. But just because they couldn't vote early doesn't mean that black voters won't vote. Many will take the time to turn out on election day and cast their ballots for Hillary Clinton. In my humble opinion all Republicans have succeeded in doing with their voter suppression tactics is moving the day when African Americans vote.

So everyone just relax. The black vote will be there for Hillary and help make her the next President of the United States.