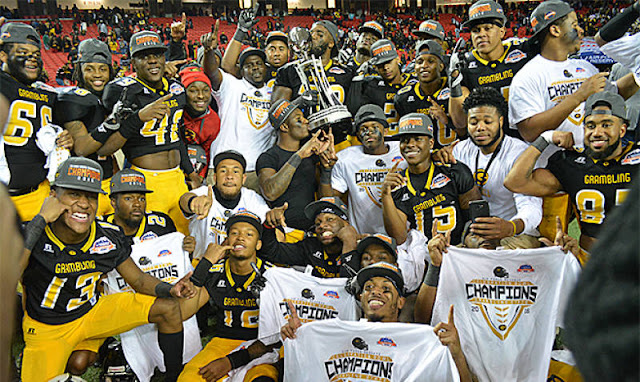 In a low-scoring affair, Grambling State came out on top with a 10-9 win over North Carolina Central in the 2016 Air Force Reserve Celebration Bowl.

A sluggish first half by Grambling State gave way to a much better performance in the second half by the Tigers. The Tigers were led by Martez Carter, who got the second half started with a 32-yard touchdown run that capped off an eight-play, 70-yard drive to take a 7-3 lead.

“It is a great win for our program. It was one of those situations where we had to battle right down and play great defense and run the football." Head Coach Broderick Fobbs said. "That is what makes our football team a very dominant team. We are able to win in many different ways.”

The Tigers’ Arkez Cooper would force a fumble on N.C. Central’s next possession with a strip-sack, and the Tigers took over at N.C. Central’s 25 yard line. The Tigers would get three points off of the turnover, with a 26 yard field goal from Jonathan Wallace to give the Tigers a 10-3 lead.

N.C. Central thought that it had the game tied up late in the fourth quarter after a 39 yard touchdown pass from Malcolm Bell to Quentin Atkinson. However, a blocked extra point by Joesph McWilliams kept the Tigers’ lead, making it 10-9. That play turned out to be the deciding factor. Grambling would not let NC Central have another possession, holding on for the victory.

“Today, we ran the football effectively, and were able to establish some drives and put what we needed to do in the end zone” Fobbs added. “ My hat goes off to North Carolina Central, they have a great program. It was definitely an even matched ball game, as you can tell by the score.”