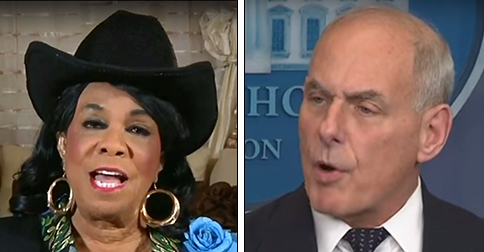 White House chief of staff John Kelly says he will "absolutely not" apologize for his comments on Rep. Frederica Wilson, adding that he stands by his comments.

When defending Trump in the wake of the feud, Kelly claimed Wilson had boasted of securing "$20 million" in federal funding to build a new FBI field office in Miami during the dedication ceremony for the building in 2015. He also called the congresswoman an empty barrel, saying her remarks focused more on her own actions than the heroism of the two FBI agents for whom the new building had been named.

But a Sun Sentinel video of the building dedication ceremony confirmed that she had not taken credit for the building's funding.

Asked Monday if he felt like he needed to apologize for his comments about Wilson, Kelly said, "Oh, no. No. Never. Well, I'll apologize if I need to. But for something like that, absolutely not. I stand by my comments."

Wilson tweeted Tuesday that she stands by her call for Kelly to apologize to her.

"I stand by what I said. John Kelly owes the nation an apology because when he lied about me, he lied to the American public," she said.

The call in question was to the widow of Sgt. La David Johnson, who was one of four soldiers killed during an ambush in Niger.

"As far as the young widow goes -- she has every right to say what she wants to say," Kelly said, according to a transcript of an interview on Fox News' "The Ingraham Angle."

Kelly said he felt Wilson's retelling contributed to "the politicization of something that was so from the heart." Kelly said he was "brokenhearted" by the congresswoman's criticism, and said he had given the President some guidance on consoling the families.