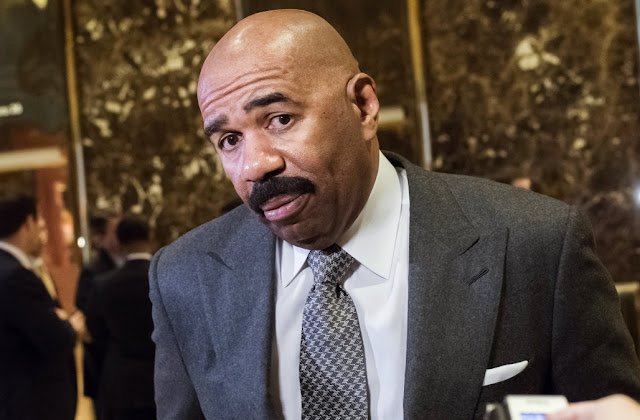 Steve Harvey's ratings for his new talk show Steve have been tanking due to his meeting with Donald Trump in January.The comedian's black supporters criticized the meeting but Harvey failed to properly address the backlash, resulting in poor ratings for his programs.

Steve Harvey is attempting to save his new talk show by distancing himself from President Trump after his ratings took a hit due to fallout for taking a meeting with Trump in January.

The 60-year-old relaunched his daytime show when his previous program was set to be canceled because the host refused to sign his contract because he wasn't getting a raise and couldn't move his show to Los Angeles.

As a result, Harvey's talent agency decided to launch a new show, simply retitled Steve, for the comic based in Hollywood in an effort to keep the show going.

The retooled show premiered on September 5 after a few months of preparation, and both ratings and reviews for the program have been less than stellar.

Sources close to the production told DailyMail.com they believe the poor numbers reflect a fallout from Harvey's black audience after he met with Trump in January.

Now Harvey is turning on the president in a desperate bid to save his show, recently proclaiming on his radio show: 'Meeting with Donald Trump was the worst mistake of my life.'

African-Americans were outraged by the images of Harvey being chummy with the then-President Elect and many called for boycotts against the comic.

Harvey was dismissive and defiant despite the backlash and lashed out at fans for challenging his decision.

The source said: 'This is the moment his brand took a hit. He had been through a few scandals before - the divorces, the Miss Universe Pageant and the Asian joke gone bad - but he had never faced the wrath of his core audience before, middle-aged African Americans.

'And unfortunately for Steve, he was too arrogant to realize the weight of his mistake and never made amends to his loyal followers for it.'

Since then, the ratings for Harvey's game show Family Feud took a dip and the audience for his variety show Little Big Shots dropped almost by half.

But it wasn't until the ratings for his revamped talk show started suffering did Harvey acknowledge his glaring Trump error.