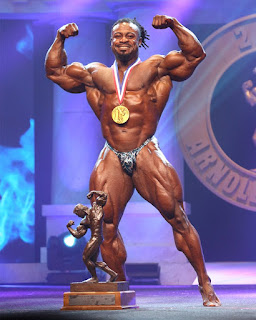 William “The Conqueror” Bonac, a Ghana native now living in the Netherlands, dominated all three rounds of judging in cruising to his first major professional victory. It was the fourth career win for Bonac, who was third at the 2017 Mr. Olympia.

Bonac received congratulations from Arnold Schwarzenegger, a check for $130,000, a Tony Nowak Official Champions Jacket and the champion’s trophy from Catherine Colle of Midway Labs USA and Eric Hillman of Optimum Nutrition.