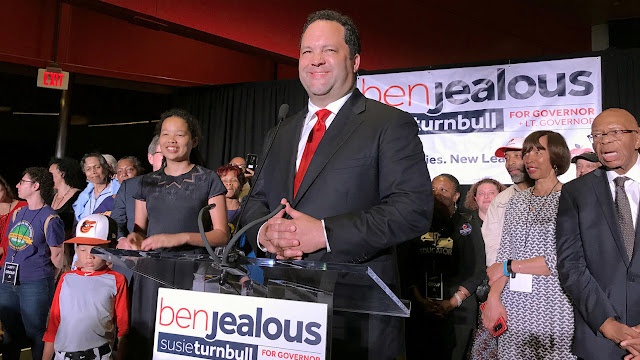 Bolstered by support in the Baltimore region, spending from outside groups and an aggressive union-backed turnout machine, Jealous emerged from the six-way primary as Democrats’ bet to take on popular Republican Gov. Larry Hogan in November.

His victory over fellow front-runner Prince George’s County Executive Rushern L. Baker III, who was backed by the state’s political establishment, demonstrated the growing influence of the progressive wing of the Maryland Democratic Party. His win was part of a wave of victories against establishment candidates in state government.

“Our goal is to not just win an election but to build a movement, which will allow us to lead into law the new agenda that this state so desperately needs,” Jealous told supporters at his Baltimore victory party.

“I know there is skepticism that Larry Hogan can be beaten. Well, we’ve got a message for those who think this race is already over. Larry Hogan will lose in November because he is not ready to run against someone who knows how to build a true people-powered grassroots campaign.”

Maryland has never elected an African-American governor, and Jealous’ victory is just the second time the state has nominated a black man for the job.