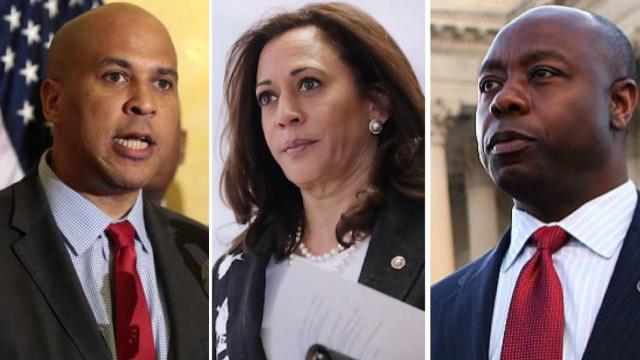 U.S. Senators Cory Booker (D-NJ), Kamala D. Harris (D-CA), and Tim Scott (R-SC), the only African-American members of the United States Senate, have introduced legislation to make lynching - the willful act of murder by a collection of people assembled with the intention of committing an act of violence upon any person – a federal crime. The Justice for Victims of Lynching Act of 2018 will amend the United States Code to specify that lynching is a crime in itself that would warrant an enhanced sentence under existing federal hate crime statues. Leader Mitch McConnell was recently asked about anti-lynching legislation and responded, “I certainly would support it.”

“It’s a travesty that despite repeated attempts to do so, Congress still hasn’t put anti-lynching legislation on the books,” said Senator Booker. “This bill will right historical wrongs by acknowledging our country’s stained past and codifying into law our commitment to abolishing this shameful practice.

“Lynching is a dark, despicable part of our history, and we must acknowledge that, lest we repeat it,” said Senator Harris. “From 1882 to 1986 there have been 200 attempts that have failed to get Congress to pass federal anti-lynching legislation, it’s time for that to change.”

"This measure is certainly well past due and I am glad to be able to join in efforts that will underscore the severity of this crime,” said Senator Scott. “This piece of legislation sends a message that together, as a nation, we condemn the actions of those that try to divide us with violence and hate.”

"It is never too late for our nation to express our sorrow for the decades of racial terror that traumatized millions in this country, said Bryan Stevenson, Executive Director of the Equal Justice Initiative and the founder of the National Memorial for Peace and Justice in Montgomery, a national memorial acknowledging the victims of racial terror lynchings. “Passing an anti-lynching law is not just about who we were decades ago, it's a statement about who we are now that is relevant, important and timely."

The efforts to pass anti-lynching legislation date back to 1918, when Congressman Leonidas C. Dyer (R-Mo.) became the first member of Congress to introduce a bill on the subject. His bill, intended to punish authorities that failed to prevent lynching, was designed to act as a deterrent that would end the practice. His bill ultimately died in the Senate after facing stiff opposition. After 200 failed attempts by Congress to pass anti-lynching legislation, however, Congress is now prepared to right this shameful failure to criminalize lynching as an instrument of terror and intimidation used against more than 4,000 African-African men, women, and children during the late 19th and 20th centuries, according to data from the Equal Justice Initiative.

As recently as 2005, ninety (90) members of the U.S. Senate passed a bipartisan resolution apologizing to the victims of lynching for the repeated failure of the Senate to enact anti-lynching legislation. These senators expressed their deepest sympathies and most solemn regrets of the Senate to the descendants of victims of lynching, the ancestors of whom were deprived of life, human dignity, and the constitutional protections accorded all citizens of the United States.

This is the Senate companion to legislation introduced last week in the House of Representatives by Congressman Bobby L. Rush (H.R. 6086) and 36 members of the Congressional Black Caucus.

The Justice for Victims of Lynching Act is supported by the following organizations: NAACP, Anti-Defamation League, and Equal Justice Initiative.

Text of the bill can be found here.