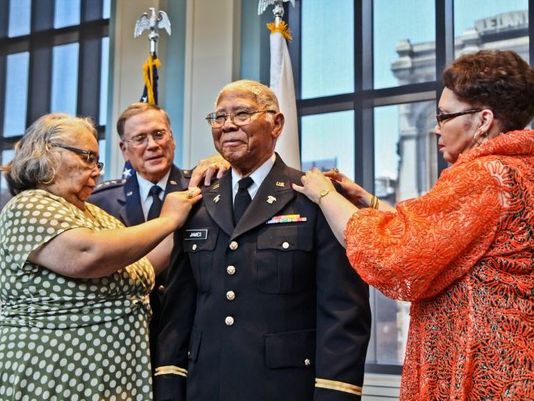 Seventy-six years after being denied his officer status in the U.S. Army, a Philadelphia man was ceremoniously commissioned Friday as a second lieutenant.

John James of Southwest Philadelphia, now 98, completed officer training in 1942, but he was denied his rightfully earned bars because he is black.

In 1941, James was drafted into the Army. After the Japanese attack on Pearl Harbor, he was preparing to ship out to the Pacific, but took a chance on applying for officer training in Fort Benning, Georgia.

He finished training in about three months, but, the day before he was to receive his commission, the camp’s contact officer pulled him aside.

“I go into his office and he said, ‘I’m not going to grant you your bars. You’re being transferred,’” recalled James.

During World War II it was not uncommon for African-American soldiers to be denied an officer commission if they were to be assigned to a predominately white unit. At the time, it was against Army regulation for white soldiers to be subordinate to blacks.

James spent the war as a corporal, serving as a typist with a quartermaster battalion supplying front-line combat units in North Africa and Italy for three years. He was part of several key moments of the war, including the Battle of Salerno and the Battle of Monte Cassino.

At the end of the war, he returned to Philadelphia and studied to be a mortician. With mortuary jobs scarce and a family to support, he jumped at an opening at the post office.

“Naturally, I was not going to leave that,” said James. “That was sure money.”

Life carried on. James spent 35 years at the post office. He had three kids. His wife passed away in 1969. He eventually remarried and took on three stepchildren. He retired. He spent a lot of time fishing.

All that time he never told his children anything about being an uncommissioned Army officer, until three years ago when his daughter discovered the class photo from Fort Benning.

“Throw it in the trash,” he told her.

Instead, Dr. Marion Teresa Lane framed it and hung it on the wall. The James family history has a long military streak: They have had an ancestor in every American war since the Revolutionary War (except the Spanish-American war, which the Jameses sat out).

With all that under her belt, as well as a 38-year career in public education, Lane said she knows how to work through red tape. She was determined to get her father’s commission.

At the commissioning ceremony in the Museum of the American Revolution’s Liberty Hall, complete with color guard, Casey said he was “humbled” to finally present James with his officer’s certification.

“Although not awarded the commission owed to him, he bravely rose to face one of our most challenging times in history,” said Casey. “He was denied recognition of his service to his country simply because of his race, because of the color of his skin.”

Also lauding James was Gen. John Jumper, a former Vietnam fighter pilot, who is now the museum’s board chair and acting interim president. He said one of America’s greatest attributes is an ability to correct its mistakes, even if it’s long after the fact.

In many ways, James is the story of African-American patriotism – its noble honors and crushing disappointments. After two centuries of public service, the family is sending another generation into the field: James’ grand-nephew is now enlisted in the Army.