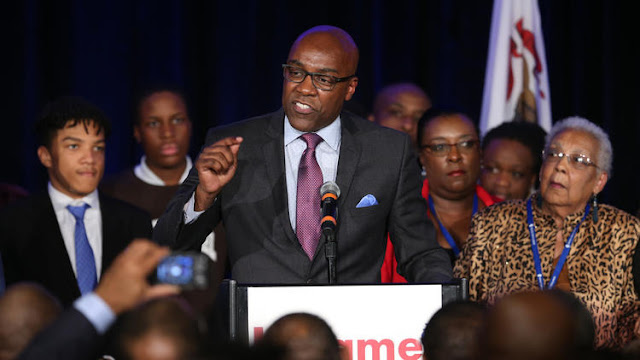 Obliterating concerns from some Democrats that the race had tightened in the final days, Kwame Raoul cruised to an easy victory Tuesday over Republican Erika Harold to become Illinois’ first new attorney general in 16 years.

Raoul romped to a double-digit win over Harold, a result that tracked closely with major wins piled up by Pritzker and the rest of the party’s statewide candidates.

“All the way to the end, people were saying this was a nail-biter,” Raoul said with a laugh during his victory speech at a downtown hotel. “But numbers don’t lie.”

With 86 percent of the state’s precincts reporting, Raoul had won 54 percent of the vote to Harold’s 43 percent and 2 percent for Libertarian Bubba Harsy of Du Quoin, according to unofficial results.

Raoul’s sizable win left an enthusiastic crowd to greet him at the Fairmont Chicago Millennium Park hotel when he stepped on stage to accept a win that was boosted by a late infusion of campaign cash from Madigan, the state party and major unions.

“This campaign was the audition for the work that is yet to come,” Raoul said before repeating a familiar line from his TV ads. “It’s the work of my life, but I’m just getting started.”