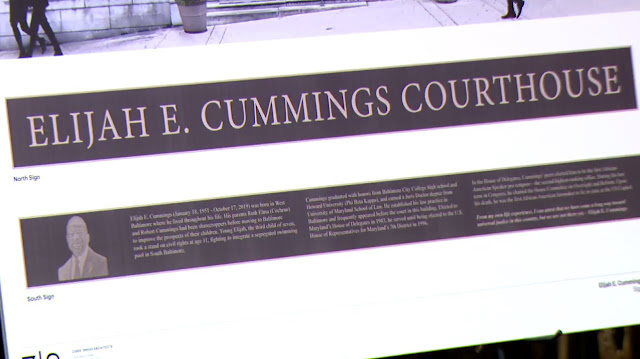 The city of Baltimore will formally name a courthouse after the late U.S. Rep. Elijah Cummings in the first half of 2020.

Democratic Mayor Bernard C. “Jack” Young unveiled renderings Friday of bronze plaques that will be affixed to the exterior of Courthouse East of the Baltimore Circuit Court. One includes an image and biography of the congressman, and the other reads “Elijah E. Cummings Courthouse.”

"Elijah was a son of Baltimore. He was proud of Baltimore," his widow, Maya Rockeymoore Cummings, said during the unveiling ceremony. "His career as a legal professional started in this courthouse."

Young spokesman James Bentley said the plaques will be installed in the spring or early summer after the city receives approval from the U.S. Department of Interior because the courthouse is a federal building. It was originally a federal courthouse, and still contains a post office.