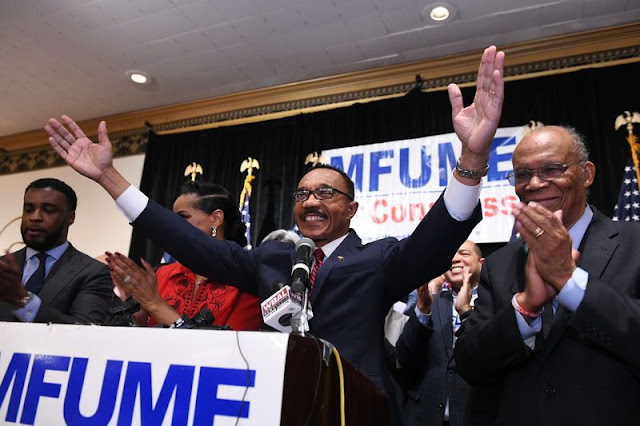 Kweisi Mfume took a major step toward reclaiming the Baltimore-area U.S. House seat he held for 10 years, capturing the Democratic nomination to succeed his longtime friend, the powerful Elijah Cummings.

The former NAACP leader, 71, topped a field of 24 Democrats Tuesday to advance to an April 28 special general election to fill the remainder of Cummings’ 7th Congressional District term.

Mfume represented the district, which includes parts of Baltimore City, Baltimore County and Howard County, until stepping down in 1996 to lead the NAACP.

“I want to thank all the many people of the 7th Congressional District. I accept your nomination,” Mfume told an audience of a few hundred cheering supporters at The Forum, a banquet hall in northwest Baltimore. A half-dozen American flags were positioned on the stage where he spoke.

Mfume enjoyed high name recognition, particularly among older voters who remembered him as a congressman and, earlier, a member of Baltimore City Council. That helped him in an 11-week campaign in which most other candidates struggled to get attention.

He told voters his congressional priorities would include lowering the cost of prescription drugs, improving the Affordable Care Act health care system, and reinstating a federal assault weapons ban.