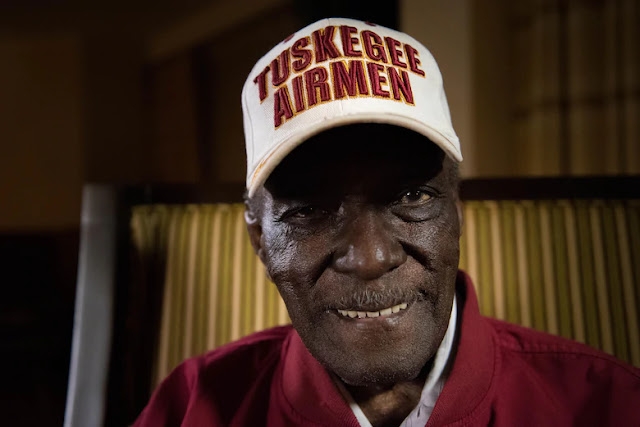 James Alonzo Cotten was born on June 4, 1927, in Chapel Hill, NC. At his request, he was cared for at home by his family, and transitioned on August 14, 2020. James was married for 73 years to his high school sweetheart, Oteria. They met at a dance, and continued to dance throughout his life.
Chief Master Sergeant (Ret) James A. Cotten was drafted into the U.S. Military Service from his hometown of Pittsburgh, Pa., and was inducted into the U.S. Army at Indiantown Gap, Pa. on August 14, 1945. Upon completion of Basic Training in January 1946, he was selected for assignment to the famed Tuskegee Airman, 332nd Fighter Group, the all Afro-American Army Air Corps Unit at Lockbourne Army Air Base, Columbus, Ohio.
During his military career, Cotten was assigned to many other military installations and after more than 21 years of active military service in the U.S. Air Force, he retired at McGuire AFB, Lakehurst, New Jersey on December 31, 1965.
In 1966, he entered into U.S. Civil Service for another 45 years with the Department of Defense at Joint Base McGuire-Dix. In December 2012, he retired as the Supervisory Contract Administrator for U.S. Transportation Command Contract Airlift Program.
On May 3, 2012, James A. Cotten was presented the Congressional Gold Medal for his military service with the Tuskegee Airmen. A Congressional Gold Medal is an award bestowed by the United States Congress and is the highest civilian honor in the United States. It is awarded to persons "who have performed an achievement that has an impact on American history and culture that is likely to be recognized as a major achievement in the recipient's field long after the achievement."
Mr. Cotten was an active member of the Twenty Plus Retirement Club. He served the ABCO community in the capacity of Board Member and was on the Supervisory Committee for more than 9 years. Also, he served on the New Jersey Credit Union League Board of Directors for over 20 years.
Mr. Cotten affectionately known as "Dad or Granddad", was the patriarch of the Cotten family, and he leaves behind to cherish his loving memory, wife, Oteria; brother, Ralph (Sandra); sister, Lorraine (Roland); sisters-in-law, Charolette (Russell-predeceased), Gwendolyn, and Antoinette (Ben); brother-in-law, MSgt (Ret) William Smith (Debra); ten children, Charen; LtCol (Ret) James M. (Berthel); Marlane (Tyrone); Wannetta (Cmdr (Ret) Ernest L. Jolly); Christina; Terie; Arlene (Mark); SMSgt (Ret) Dale A. (Zina); Kevin; Lauren (Aundrey); 16 Grandchildren; 21 Great-Grandchildren; two Great-Great-Grandchildren; and a host of nieces, nephews, and friends.
In lieu of flowers, donations can be made in his memory to the Twenty Plus Retirement Club Scholarship Fund, PO Box 46, Mt. Holly, NJ 08060.
His life Celebration Services will be held private to the family Friday, August 21, 2020. Family and friends may participate in a walk through viewing Thursday, August 20, 2020 5pm until 8 a.m. at the TL Hutton Family & Friends Funeral Services, 869 Beverly Road, Burlington, N.J. All attendees must wear a mask to enter walk through. Friends may also view by Live Stream 11 a.m. Friday at the website below.
TL Hutton Family & Friends Funeral Services
www.tlhuttonfuneralservices.com
To Plant Memorial Trees in memory, please visit our Sympathy Store.