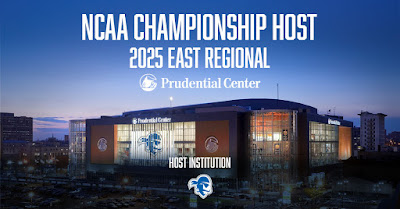 Seton Hall University and Prudential Center in Newark NJ have been selected to host an NCAA Men's Basketball Tournament regional in 2025, the NCAA announced Wednesday as part of its unveiling of more than 450 selections of host sites for preliminary rounds and final sites of predetermined championships in Divisions I, II and III, with most to be held from 2022-23 through 2025-26. The regional will take place March 27 and 29 in 2025.

In response to the news, Newark Mayor Ras Baraka Tweeted:

Happy to have @NCAA #MarchMaddness return to Newark in 2025!!!

The proud home arena for Seton Hall men's basketball, Prudential Center was ranked a top-10 venue in the U.S. earlier this year and annually hosts the biggest names in entertainment and sports.

The NCAA sports committees made the nearly 450 selections of host sites based on criteria that included the ability to create an outstanding experience for student-athletes, along with adherence to NCAA sport-specific bid specifications.

Specifications can include, but are not limited to, providing optimal facilities; ease of travel to the location and ample lodging; and adherence to NCAA principles, which include providing an atmosphere that is safe and respects the dignity of all attendees.