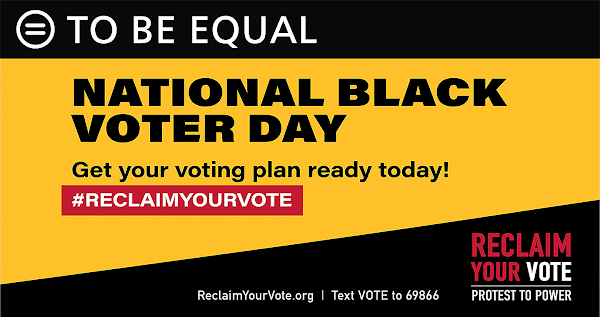 “Too many people struggled, suffered and died to make it possible for every American to exercise their right to vote. And we have come too far together to ever turn back. So we must not be silent. We must stand up, speak up and speak out. We must march to the polls like never before. We must come together and exercise our sacred right.” – Congressman John Lewis

In April of 2019, the Associated Press released an analysis of census data and exit polling that reached a remarkable conclusion: the Black voter turnout rate in the 2012 presidential election exceeded the white rate for the first time in history.  A census report in May confirmed the AP’s findings.

Some researchers disputed the findings, contending that the milestone actually had occurred in 2008.

The Supreme Court’s 2013 decision in Shelby v Holder slammed the brakes on nearly five decades of progress on narrowing the gap between white and Black voter participation rates. By eliminating a requirement that the federal government approve election law changes in jurisdictions with a history of racial discrimination, Shelby unleashed a deluge of restricting voting laws throughout the United States.

The National Urban League, in partnership with BET and other advocacy groups, designated September 18 National Black Voter day as part of our voter engagement and education campaign, #ReclaimYourVote.

We chose September 18 was because it is the first day for early in-person voting in the country. Although “Election Day” is more than six weeks away, voting has already begun. Thousands of North Carolinians have already returned their absentee ballots.

We’re asking Black Americans to make a plan. Will you vote in person, or by mail? If your state allows early in-person voting, what day will you vote? Where is your polling place? If you plan to vote by mail, what are the rules in your state? Do you need a witness when you sign your ballot, like the voters in North Carolina, opportunity to get voters registered, demystify the voting process, provide guidance on voting rights restoration for eligible voters, and help voters create their voting plan to plot a clear path to the ballot box.

We’ve broken the process down into five steps:

Between the time of the Shelby v. Holder decision and the 2016 presidential election, 9 out of the 15 jurisdictions previously covered by Section 5 of the Voting Rights Act had new restrictions in place.  Texas announced within 24 hours of the decision that it would implement a strict photo ID law, and  Mississippi and Alabama, began to enforce photo ID laws that had previously been barred because of federal preclearance.

We will not be defeated. The National Urban League continues to advocate for the restoration of the Voting Rights Act, and is committed to safeguarding the right of every American to fully participate in our democracy and civic processes.

Commenting on efforts to suppress the Black vote, the late Congressman John Lewis said, “I've seen this before. I've lived this before.”  Prior to the Voting Rights Act, he said,  “People stood in unmovable lines. They had to pass a so-called literacy test, pay a poll tax. On one occasion, a man was asked to count the number of bubbles in a bar of soap. On another occasion, one was asked to count the jelly beans in a jar—all to keep them from casting their ballots.