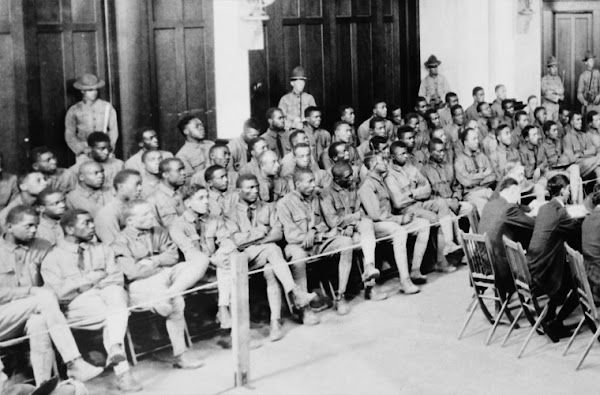 A large crowd of community leaders gathered at South Texas College of Law Houston (STCL Houston) Friday to officially commemorate the law school’s ongoing collaboration with the NAACP Houston Branch to fight for clemency for the 110 soldiers of the 3rd Battalion, 24th Infantry Regiment convicted by General Courts-Martial for their alleged role in the 1917 Camp Logan uprising.

“This incident was one of the first projects the NAACP Houston Branch ever investigated a century ago, and it continues to be important to us today,” said Dr. James Dixon, NAACP Houston Branch board president. “We must address this past injustice and educate people about the wrongs that occurred so they don’t happen again. We are determined to seek clemency for these soldiers because it is never too late to do the right thing.”

“On Aug. 23, 1917, members of the 3rd Battalion, 24th Infantry Regiment — an all-African American Army unit with a distinguished history of combat service (often called the Buffalo Soldiers) — marched out of its encampment in Houston to confront what it believed was a white mob setting upon the soldiers,” Corn noted at the event.

The incident, which resulted in the deaths of 11 locals and six soldiers, was the culmination of weeks of racially charged confrontations between members of the unit and the local Houston police.

“The actual violence that night lasted approximately three hours, but the implications of the unjust convictions and punishments that occurred afterward have lasted a century,” Corn said. “These soldiers – regardless of the circumstances of the violence that occurred – did not receive due process and had no opportunity to appeal. The justice system failed them.”

“The NAACP Houston Branch and South Texas South Texas College of Law Houston share a common priority: a focus on justice,” said Michael F. Barry, STCL Houston president and dean. “We also have a shared interest in ensuring an accurate historical narrative of the events that transpired at Camp Logan and the stories of the soldiers involved. Finally, we have a common interest in restoring the proper honor and respect for the Buffalo Soldiers stationed at Camp Logan – soldiers who were some of the bravest men in our nation.”

Professor Angela Holder — great-niece of Cpl. Jesse Moore, one of the soldiers convicted and executed in 1917 — gave a personal perspective during the event. “These 24th Infantry Regiment soldiers are not just names in history. They are real people. They are my Aunt Lovie’s brother. My Uncle Jesse. They sacrificed for our country, and now they deserve clemency.”

Because of their shared commitment to equal justice under the law, the NAACP Houston Branch and STCL Houston will continue collaborating to fulfill the mission of obtaining clemency for these Camp Logan soldiers, Barry said.

In the years following the 1917 incident, the NAACP led an effort to draw attention to this rush to judgment, which led to pressure on President Wilson to intervene and demand legal review of the two courts-martial that followed the first trial of 63 soldiers (the largest criminal trial in U.S. history). This review, and the public outrage over the first trial, led President Wilson to commute a number of death sentences to life in prison.

However, clemency remains the goal. The NAACP Houston Branch led an effort, initiated on the 100th anniversary of the incident in 2017, to seek a pardon for the 13 soldiers sentenced to death in the first trial. Unfortunately, that effort stalled without a successful outcome.

Professor Corn was asked to provide advice to the NAACP group working on this effort, and he continues to be actively involved. Professor Dru Brenner-Beck — also a retired U.S. Army JAG officer who will join the STCL faculty this summer — has led an effort along with historian John Haymond to conduct a comprehensive review of the records related to this incident and these military trials, based on extensive historical records here at the law school and other records throughout the country.

South Texas librarians and law students working in the Actual Innocence Clinic have contributed substantially to this effort by providing important research and narratives of the many soldiers convicted in the trials.

“We and the NAACP Houston Branch are committed to the Camp Logan soldiers in part to restore their honor; in that sense, this effort is about the past, about righting a historic wrong,” Barry said. “But this effort benefits us all tomorrow, as well, helping ensure that the violations of due process of a century ago will never be repeated.”

Posted by Councilman George L. Cook III at 10:58 AM