Rep. Rush statement on the passage of the Emmett Till Antilynching Act 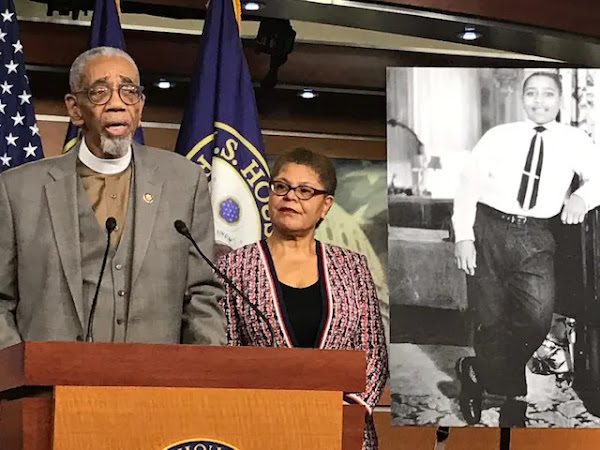 The Emmett Till Antilynching Act (H.R. 55), legislation sponsored by U.S. Representative Bobby L. Rush (D-Ill.), overwhelmingly passed the House of Representatives by a vote of 422–3.

Rep. Rush released the following statement on the bill's passage:

“Today is a day of enormous consequence for our nation,” said Rep. Rush. “By passing my Emmett Till Antilynching Act, the House has sent a resounding message that our nation is finally reckoning with one of the darkest and most horrific periods of our history, and that we are morally and legally committed to changing course.

“The failure of Congress to codify federal antilynching legislation — despite more than 200 attempts since 1900 — meant that 99 percent of lynching perpetrators walked free. Today, we take a meaningful step toward correcting this historical injustice. I am immensely proud of this legislation, which will ensure that the full force of the U.S. federal government will always be brought to bear against those who commit monstrous acts of hatred.

“I was eight years old when my mother put the photograph of Emmett Till’s brutalized body that ran in Jet magazine on our living room coffee table, pointed to it, and said, ‘this is why I brought my boys out of Albany, Georgia.’ That photograph shaped my consciousness as a Black man in America, changed the course of my life, and changed our nation. But modern-day lynchings like the murder of Ahmaud Arbery make abundantly clear that the racist hatred and terror that fueled the lynching of Emmett Till lynching are far too prevalent in America to this day.

“I thank my colleagues in the House Judiciary Committee and the Senate who have worked tirelessly with me throughout the last year to reach agreement on the text of this legislation. I look forward to this bill passing the Senate and being swiftly signed into law,” Rush concluded.