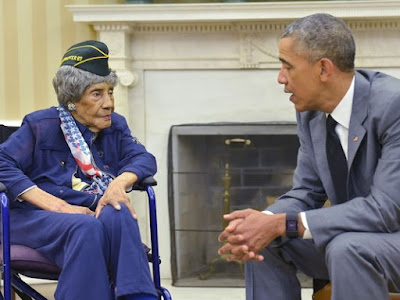 A resident of Detroit, Didlake is believed to be the nation's oldest veteran.

"We are so grateful that she is here with us today," Obama during a brief Oval Office photo opportunity.

He added: "And it's a great reminder of not only the sacrifices that the Greatest Generation made on our behalf, but also the kind of trailblazing that our women veterans made, (and) African American veterans who helped to integrate our Armed Services."

Didlake "was a Private during the course of her service and her decorations include the Women's Army Corps Service Medal, American Campaign Medal, and World War II Victory Medal," the White House said in a statement.

"It's a great honor to have her here," the president said.