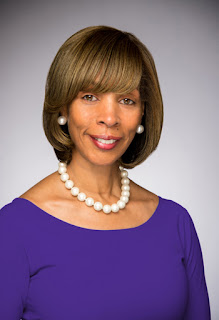 New Orleans recently took down its Confederate monuments. Baltimore Mayor Catherine Pugh says she is considering doing the same thing in the city.

“The city does want to remove these,” Pugh told The Baltimore Sun. “We will take a closer look at how we go about following in the footsteps of New Orleans.”

Pugh said she’s been focused in her first months in office on implementing police reforms under the consent decree negotiated with the Department of Justice and finding more funds for the school system. She said she’s now turning her attention to other issues, such as the monuments.

“You name it, we’ve tackled it,” she said. “This is another one of those things that we will tackle as well.

“New Orleans has taken on this issue. It costs about $200,000 a statute to tear them down. … Maybe we can auction them?”

Posted by Councilman George L. Cook III at 10:31 AM

The only cause of the Civil War was the Southern secession that ensued so that slave owners (3% of Southerners) could keep their slaves and spread slavery to new territories west. The men who paid the major sacrifice for these slaves that they did not own were led to believe that they were fighting for their “freedom.” (Inexplicably, over 150 years later, they still believe that.)

¶Lincoln issued the Emancipation Proclamation on January 1, 1863 in order to remove the South's labor force which freed up whites to fight. The proclamation only applied to the Confederate States, as an act to seize enemy resources. Lincoln could do this because the South was in rebellion. However, on July 28, 1868, the 14th Amendment to the United States Constitution was ratified. The amendment grants citizenship to "...all persons born or naturalized in the United States" which included former slaves who had just been freed after the Civil War. (BTW, this also includes immigrants today.)

¶Eric Foner, DeWitt Clinton Professor of History at Columbia University: "Two societies based on different systems of labor had developed within our single political system, and the leaders of each believed that expansion into the West was essential for their society's prosperity.

¶Abraham's Lincoln's election convinced Southern leaders that their region was fated to become a permanent minority, which would put its future prospects—based on slavery—in jeopardy and that therefore they should create their own nation, while Northerners were not willing to see the country broken up. The result was civil war."

¶“Vice President of the Confederacy, Alexander Stephens, made it clear that the Confederate cause was about maintaining slavery and white supremacy. He said in his now famous ‘corner-stone speech’ that the Confederacy’s: ‘corner-stone rests upon the great truth, that the negro is not equal to the white man; that slavery—subordination to the superior race—is his natural and normal condition. This, our new government, is the first, in the history of the world, based upon this great physical, philosophical, and moral truth.’”

¶These monuments are dedicated to traitors and must be removed.