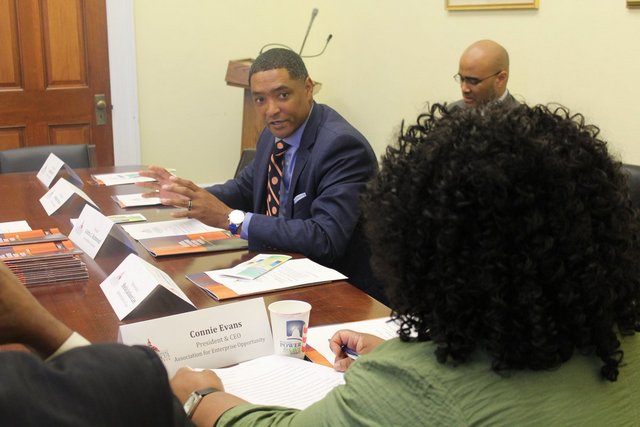 The Congressional Black Caucus turned down an invitation to meet with President Donald Trump, telling him Wednesday they believe their concerns are falling on "deaf ears" at the White House and his policies are devastating to the millions of Americans in the nation's black communities.
A White House spokeswoman said the development was "pretty disappointing" and pledged to arrange for individual members to meet one-on-one with Trump.
Caucus Chairman Cedric Richmond told Trump in a letter that his proposed budget, his efforts to dismantle Democrat Barack Obama's health care law and actions by Attorney General Jeff Sessions are detrimental to many African-Americans. Richmond said the caucus had expressed its concern several times, including in eight letters and a document, but the administration has failed to respond.
"The CBC, and the millions of people we represent, have a lot to lose under your administration," Richmond wrote. "I fail to see how a social gathering would benefit the policies we advocate for."
Trump and top members of the caucus met in March, but Richmond said there has been no follow-through on promises like helping black lawmakers meet with Trump's Cabinet.
Specifically, the caucus criticized Trump's budget proposal, which would cut money for Pell Grants for low-income college students and eliminate the Low-Income Home Energy Assistance Program, which helps seniors and others on fixed incomes heat their homes.
The caucus singled out moves by Sessions on drug prosecutions and civil rights enforcement, and complained that the House GOP health care bill that Trump celebrated during a Rose Garden ceremony would "strip millions of black people of their health care."
Richmond's letter responded to an invitation from Trump aide Omarosa Manigault, chief spokeswoman for the White House Office of Public Liaison.
"It's pretty disappointing that Cedric Richmond has decided to go back on his commitment to meet with us," Manigault said in a telephone interview.
She said caucus members who were excluded from the March meeting have been reaching out to her personally, as well as to the White House legislative affairs team, seeking one-on-one meetings with Trump to discuss issues their constituents are concerned about.
"We will do that because they have made those requests and we will honor those requests," Manigault said. "That's not going to be deterred because of Cedric Richmond's political gamesmanship."
Rep. Gregory Meeks, D-N.Y., said caucus members want substance from the White House, not a social event.
"We want to talk and deal with issues that are of concern to the members of the Congressional Black Caucus, and we've not gotten any response," Meeks said. "My opinion and the opinion of most of just about all of the members of the CBC is that the board met (with Trump). They gave him substantive issues which we wanted to deal with and they have not been dealt with."
Meeks added, "Until we can deal with substance and issues what's the benefit of a meeting."