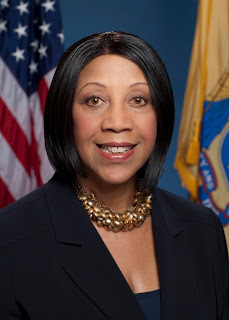 NJ Democratic gubernatorial nominee Phil Murphy has chosen Sheila Oliver, the former speaker of the Assembly, as his running mate in this November's election, according to a source with direct knowledge of the selection process.

The first African-American woman Assembly speaker in state history, Oliver has more than a dozen years of legislative experience, serving in the lower house of the New Jersey Legislature since 2004.

She also served on the Essex County board of chosen freeholders (county commissioners) from 1996 to 1999.

Born and raised in Newark, Oliver, 65, graduated from Weequahic High School before moving to Pennsylvania to earn a degree in sociology at Lincoln University, the nation's first degree-granting historically black university.

Oliver took her masters in urban planning and administration she got from Columbia University and put to extensive use in Essex County, where she works as an assistant administrator.

Oliver also serves on both the Assembly's commerce and economic development committee and the Legislature's joint committee on and equal employment opportunity.

As a woman of color with a long track record of helping Jersey's urban communities, Oliver as the Lt. Governor candidate could help Murphy connect his message of economic renewal to African American voters who may have cooled to Democratic politics in the post-Obama era.