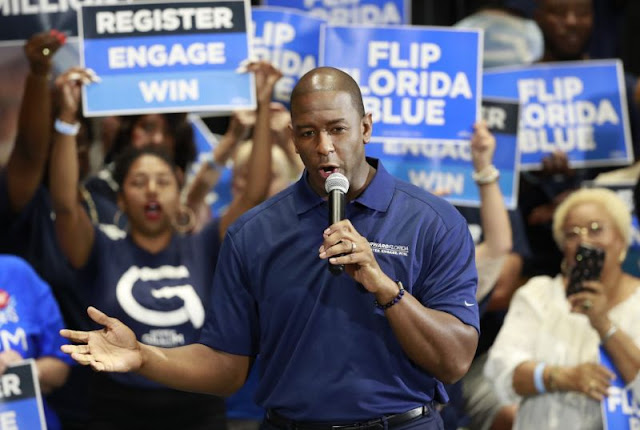 Andrew Gillum, the Tallahassee mayor who last November lost a close race to become Florida’s governor, sharply criticized new restrictions placed on voting by people with felony convictions at a congressional hearing on Monday. He said the new restrictions, passed last Friday by the Florida state legislature, amounted to a “poll tax,” one of the measures historically used in Southern states to prevent African-Americans from voting.

“The unfortunate thing” about Florida, Gillum said, was that “we almost look directly at how we disenfranchise as many people as we possibly can,” citing alleged attempts to close polling sites and dismiss absentee ballots.

Gillum made his comments at a Monday hearing of the Committee on House Administration devoted to voting rights in Florida. Gillum, a Democrat who lost in November to Rep. Ron DeSantis, now runs Bring It Home Florida, a group that seeks to register a million voters ahead of the 2020 presidential race, in which Florida will almost certainly play a critical role.

Gillum made his “poll tax” comments in response to a measure passed by the Republican-controlled Florida state legislature last week, weakening Amendment 4, a ballot initiative to allow former prisoners who have completed their sentences to vote in the state. The amendment, which would affect some 1.5 million ex-felons, passed with 65 percent of the vote in November.