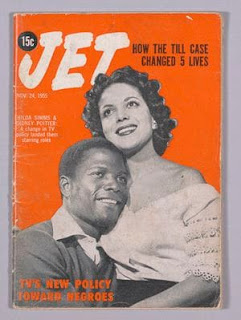 The National Museum of African American History and Culture will acquire a significant portion of the archive of the Johnson Publishing Company, the publisher of Ebony and Jet magazines. The acquisition is pending court approval and the closing of the sale.
A consortium of foundations—the Ford Foundation, the J. Paul Getty Trust, the John D. and Catherine T. MacArthur Foundation, and the Andrew W. Mellon Foundation—is making this acquisition possible. The consortium will transfer the archive to the Smithsonian National Museum of African American History and Culture and the Getty Research Institute.
The archive, purchased at auction for $30 million, includes more than four million prints, negatives, and media that explored, celebrated and documented African American life from the 1940s and into the 21st century.
“It is a distinct honor for the museum to be invited to join the Getty Research Institute and other leading cultural institutions to safeguard and share with the world this incomparable collection of photographs,” said Spencer Crew, acting director of the National Museum of African American History and Culture.
“We applaud the generosity of the consortium of foundations that made this acquisition possible.  And we pay homage to the vision of John H. Johnson and his commitment to bringing to the nation and the world, the story of the African American experience—in all its complexity and all its richness. Ebony and Jet were the only places where African Americans could see themselves. They were the visual record of our beauty, humanity, dignity, grace, and our accomplishments.
“Being the steward of the archive is an extraordinary responsibility, and we are humbled to play a critical role in bringing new life to these images. With the depth of its curatorial expertise and the technical skills in digitization, the Museum stands ready to marshall its forces to make this archive accessible to the widest possible audience.  We are honored to work with our recipient colleagues to make this gift to the nation possible.”
The Museum has built a distinctive photography collection that includes more than 25,000 prints, negatives, and photographic materials. Photographers represented in the collection include Anthony Barboza, Cornelius M. Battey, Arthur P. Bedou, Bruce Davidson, Charles “Teenie” Harris, Danny Lyon, Jack Mitchell, Jeanne Moutoussamy-Ashe, Gordon Parks, P. H. Polk, Addison Scurlock, Lorna Simpson, Aaron Siskind, James Van Der Zee, Carrie Mae Weems, and Ernest Withers. 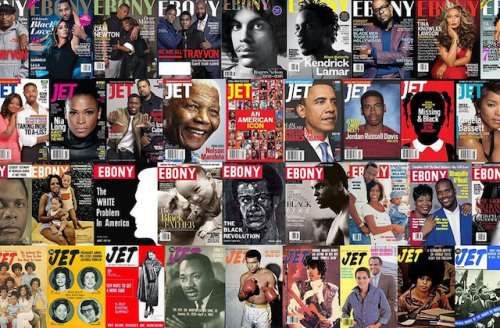 EMO is unaffected by the Chapter 7 bankruptcy announcement regarding the dissolution of JPC. EMO is not able to comment further and is not familiar with the facts or events of the JPC business.

EMO looks forward to continuing to delight and serve the Black community in America and worldwide for years to come.

The National Association of Black Journalists (NABJ) awards The Thumbs Down Award is presented annually to an individual or organization for especially insensitive, racist or stereotypical reporting of African Americans. While Fox News is a no brainer for this award the inclusion of Ebony Magazine is a bit of a surprise, until you read the NABJ's reasons why Ebony won the "award". George L. Cook III African American Reports.

The National Association of Black Journalists (NABJ) issues its 2017 Thumbs Down Award to FOX News and Ebony magazine.

The Thumbs Down Award is presented annually to an individual or organization for especially insensitive, racist or stereotypical reporting, commentary, photography or cartoon about the black community or for engaging in practices at odds with the goals of the National Association of Black Journalists.

"We take this award very seriously," said NABJ President Sarah Glover. "It is our hope that the recipients would re-evaluate their policies and procedures to ensure that they are following the highest journalistic and ethical standards."

FOX News was selected for numerous reasons. In addition to lawsuits accusing the cable news network of "abhorrent, intolerable, unlawful and hostile racial discrimination," there have also been allegations of sexual harassment. Additionally, the lack of diversity in key positions, is a major concern for NABJ.

"It seems FOX has allowed a very unhealthy environment to fester," said NABJ Vice President of Broadcast Dorothy Tucker. "There has to be a level of accountability and it starts at the top. Management has to do better."

Co-recipient Ebony magazine, under its new owners Clear View Group, has made headlines this year because of staff cuts; the relocation of its headquarters from its founding base in Chicago to Los Angeles; and, its very public and sometimes offensive responses to reports of late or non-payment for work already performed by staff or freelance journalists.

"Many of the decisions being made by Ebony's new owners seem counter to the vision of founder John H. Johnson," said NABJ Vice President of Print Marlon A. Walker. "Ebony and its sister publication Jet are near and dear to us. To hear writers whose words bring us much joy aren't being paid for those words is sad, unconscionable, unacceptable.

"Johnson is probably rolling over in his grave."

FOX News must address its work culture and diversity at all levels of employment, including management positions, and the owners of Ebony magazine must resolve its pay issues with freelancers immediately and work to rebuild its image after several alarming missteps.

Posted by Councilman George L. Cook III at 8:38 AM No comments: 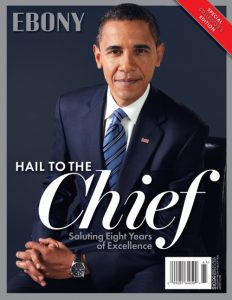 Chicago, IL, December 18, 2016 --(PR.com)-- To mark the political ascent and enduring legacy of President Barack H. Obama, Ebony has published a special commemorative edition, “Hail to the Chief: Saluting Eight Years of Excellence.” This stylish, thought-provoking issue (83 pages; $10.99) is a unique collection of exclusive photographs, archival Ebony articles and hard-hitting analyses from leading African-American writers including award-winning poet, author and civil rights activist, Nikki Giovanni; MSNBC award-winning journalist Joy-Ann Reid; culturally astute critic Eric Deggans; pop culture pundit Touré; and New York Times best-selling author Baratunde Thurston.“Our readers know the utter importance of simple images of Obama and the first family in a White House that had been very literal with respect to its previous inhabitants,” says Kyra Kyles, editor-in-chief of Ebony. “But our team went well beyond the aesthetics and recruited the most sought-after Black thought leaders to candidly discuss the social context around his administration, his achievements over two terms and the impact he will have as our first but hopefully not our last.”Among the highlights:Editor’s Letter: EIC Kyles bids adieu to President Barack Obama in this touching reflection on his absolute grace under partisan fire.Poetic Justice: Nikki Giovanni pens an exclusive poem for Ebony capturing the essence of the first African-American president.The Legacy: From his electrifying ascent to the legislative imprint he leaves behind, Ebony examines President Obama’s undeniable impact on health care, race relations, gay and women’s rights.The Love: They examine the love shared by President Barack and First Lady Michelle Obama and its impact on uplifting Black families.The Look: By combining haute couture with dashes of attainable attire, the first family embraced the power of fashion.The Laughs: He could have occasionally been dubbed “comic-in-chief.” A look at Obama’s best clapbacks.Famous Farewells: Supporters ranging from members of Congress to well-known entertainers offer their thanks and words of encouragement to the 44th U.S. president.Ebony’s commemorative special commemorative edition will be available December 20 for purchase on newsstands only. 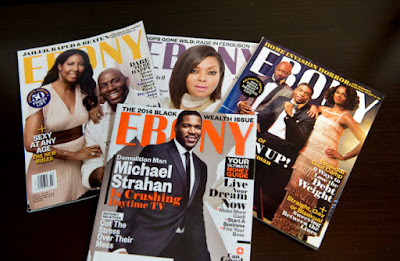 For the black community in Chicago and elsewhere, Johnson Publishing Co. represented a certain kind of hope.

The company’s magazines, most notably Ebony and Jet, gained prominence during the struggle for civil rights — Jet published graphic photos of the murdered black teenager Emmett Till that helped intensify the movement — and made it their mission to chronicle African-American life.

So when Johnson Publishing, which is based in Chicago, announced a little more than two weeks ago that it had sold Ebony and Jet to a private equity firm in Texas, there was a sense of loss.

“It was a very heartbreaking day,” said Melody Spann-Cooper, chairwoman of Midway Broadcasting Corp., which owns a Chicago radio station, WVON, aimed at a black audience. “Ebony gave to African-Americans what Life didn’t.”

Ms. Spann-Cooper’s reaction underscored a deeper concern: As racial issues have once again become a prominent topic in the national conversation, the influence of black-owned media companies on black culture is diminishing.

Posted by Councilman George L. Cook III at 10:01 AM No comments:

CHICAGO--(BUSINESS WIRE)--The Clear View Group (CVG), today announced that it has acquired the assets of Ebony Media, the publisher of Ebony Magazine, the premiere destination for African-American cultural insight, news and perspective. The iconic brands of EBONY and JET are under new management and heading in a bold new direction and will now be known as Ebony Media. The Clear View Group is an African American led investment group that brings to bear over twenty-five years of experience creating, developing and running successful corporations.
“We are excited about the future of Ebony Media and the opportunity to position the enterprise for long term growth. Our team has a true understanding of the Ebony brand as well as its legacy, and is committed to providing its audience with premium content across all media platforms,” said Michael Gibson, CEO of Clear View Group and Chairman of Ebony Media.This acquisition will position Ebony Media for long-term growth by diversifying its revenue streams and expanding its business footprint by magnifying black culture through a wide spectrum of print, event and digital mediums.
Moving forward, Linda Johnson Rice will serve as Chairman-Emeritus and will continue to be on the board of Ebony Media. Cheryl Mayberry McKissack will lead Ebony Media as the CEO. The Clear View Group will be led by Michael Gibson, who will also serve as the Chairman of Ebony Media.
"This is the next chapter in retaining the legacy that my father, John H. Johnson, built to ensure the celebration of African-Americans," said Linda Johnson Rice.
“I am excited about the opportunity to lead these world renowned brands to the next level, expanding the editorial offerings for our readership while providing new opportunities to our valued advertising partners,” Mayberry McKissack states. “Through offerings such as our annual 'Power 100' event and issue, ground breaking covers on 'The Body Brigade', Women Up and Black Hollywood events, and expanding our digital coverage, we are already seeing tremendous gains in extending our brand’s reach well beyond paper and electrons. Our legacy is not only thriving, it’s evolving.”
There are also exciting changes in store for the editorial direction of the publications. Kyra Kyles, who previously led the digital editorial strategy and operations, is promoted to Editor-in-Chief/SVP Digital Editorial, overseeing editorial content across both print and digital platforms. Kyles, a longtime content producer who has co-created and directed award-winning, viral Webisodes, will unify print, digital and social operations in an unprecedented move to enrich the overall audience’s experience. Kierna Mayo, current EIC of Ebony, will be leaving to pursue other endeavors.
About Clear View Group
Clear View Group specializes in private equity acquisitions of U.S. based, middle market companies. By partnering with businesses with experienced and proven operating management, Clear View Group helps mid level companies to grow their profitability through proven professional financial models. 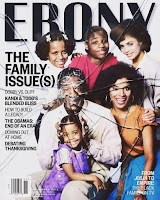 Kierna Mayo, editor-in-chief of EBONY, sits down with Don Lemon to talk about the controversial Cosby cover, and why we have to have this discussion now. Watch that interview below.