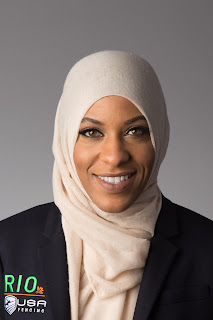 I was talking to my daughter while we were getting something to eat and the store owner had up a picture of Ibtihaj Muhammad, a local and successful fencer from Maplewood NJ who is on the US National Team headed to the Rio Olympics. I asked my daughter if she knew who it was and she guessed that it might be one of Muhammad Ali's children. My wife and I laughed and then explained to her who it was. My daughter wondered how was she supposed to know who she was if nobody told her. I thought about that and decided she's quite right, so everybody meet Ibtihaj Muhammad.

A five-time Senior World team medalist and 2014 Senior World Team Champion, Muhammad will make history in Rio as the first U.S. woman compete in the Olympic Game in hijab. Ranked as high as No. 7 in the world during the 2015-16 season, Muhammad has won both individual and team medals on the World Cup circuit.